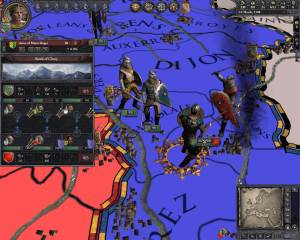 I’m often confused by people who champion emergent stories in games, but that’s largely because the stories they cite are rubbish. That said, I’ve been playing Crusader Kings 2 an awful lot, and that’s throwing stories at me left right and centre, and all of them are great.

At least until I tell people about them.

Usually, stories are a thing that should be shared. That’s the whole point of writing a book, to share a story with the world. To that end, you have to structure it in such a way that you ease the reader into it, or grab them so hard they dare not pull away. This, I think, is why I get that sense of confusion with emergent stories.

The ones I experience, like in games like Crusader Kings 2, are built around my experience with the game, the thousands of things that one can’t easily articulate that shape your game. When the story forms, it already has that bedrock of interest. When others tell me their stories, this bedrock is omitted – because it is not something easily transmitted – and so I don’t tend to connect with their stories.

This sounds like a criticism, but in truth it isn’t meant as one. If anything it is praise. True, maybe the stories aren’t easy to share with conviction, but at least they are powerful enough that you remember them.

And besides, any game that lets you create an alternate history where Abyssinia conquered Spain is fine by me.